Ventilation grilles are a thing of the past: Sound-optimised termination element for ventilation ducts contributes to pure facade aesthetics

Since 2019, Schrobsdorff Bau AG has been working on the Waterkant construction project in the Berlin district of Spandau, where it is building around 1,000 new turnkey flats - all equipped with decentralised ventilation. The highlight here is the 1600 end elements for the ventilation ducts on the outer walls. In the current construction phase, the new LUNOtherm-S from LUNOS Lüftungstechnik GmbH, also based in Berlin, is being used for indoor air systems. The slimline closure element combines aesthetics and sound insulation in a special way: Due to its weight-reduced design, it can be integrated directly into the insulation in a space-saving manner, which contributes to a pleasant facade appearance without disturbing ventilation grilles. At the same time, the special construction prevents noise from the adjacent main road from entering. In order to keep installation simple when equipping many individual rooms, LUNOS placed particularly high value on good handling during installation on site, even during the development of the product. The low weight and the simple plug-in mechanism also contribute to not interfering with the fixtures in the wall.

Ventilation grilles on the outside wall are often perceived as a disturbing element. In addition, the high building density in cities requires a much better sound insulation performance of the ventilation units than 20 years ago or in rural regions. In order to meet this combination of aesthetics and sound insulation, the builders of the Spandau housing project opted for devices from LUNOS Lüftungstechnik GmbH für Raumluftsysteme: the Silvento ec concealed terminal ventilators and the ALD external wall inserts are combined with facade elements from the LUNOtherm range. In order to meet the fire protection and sound insulation requirements specified in the project plan, sound-optimised termination elements for the ventilation ducts are installed before the actual fans are mounted. " In the past, we could simply solve the ventilation using mechanical window rebate ventilators," explains Jochen Schneider, site manager at Schrobsdorff Bau AG and responsible for the finishing work on the current project in Berlin Spandau. "However, these do not keep out external noise due to the lack of filters and inserts. In such an environment, optimised decentralised ventilation systems are needed that can combine sound insulation and comfort control. "In the context of earlier building projects, the first generation LUNOtherm products were still used," says Schneider. The new LUNOtherm-S - which is currently being integrated into more than 500 flats in the second construction phase - is considerably lighter and can therefore be more variably adjusted to the insulation thickness. The ventilation opening is placed directly in the reveal or the lintel, so that it appears virtually invisible. 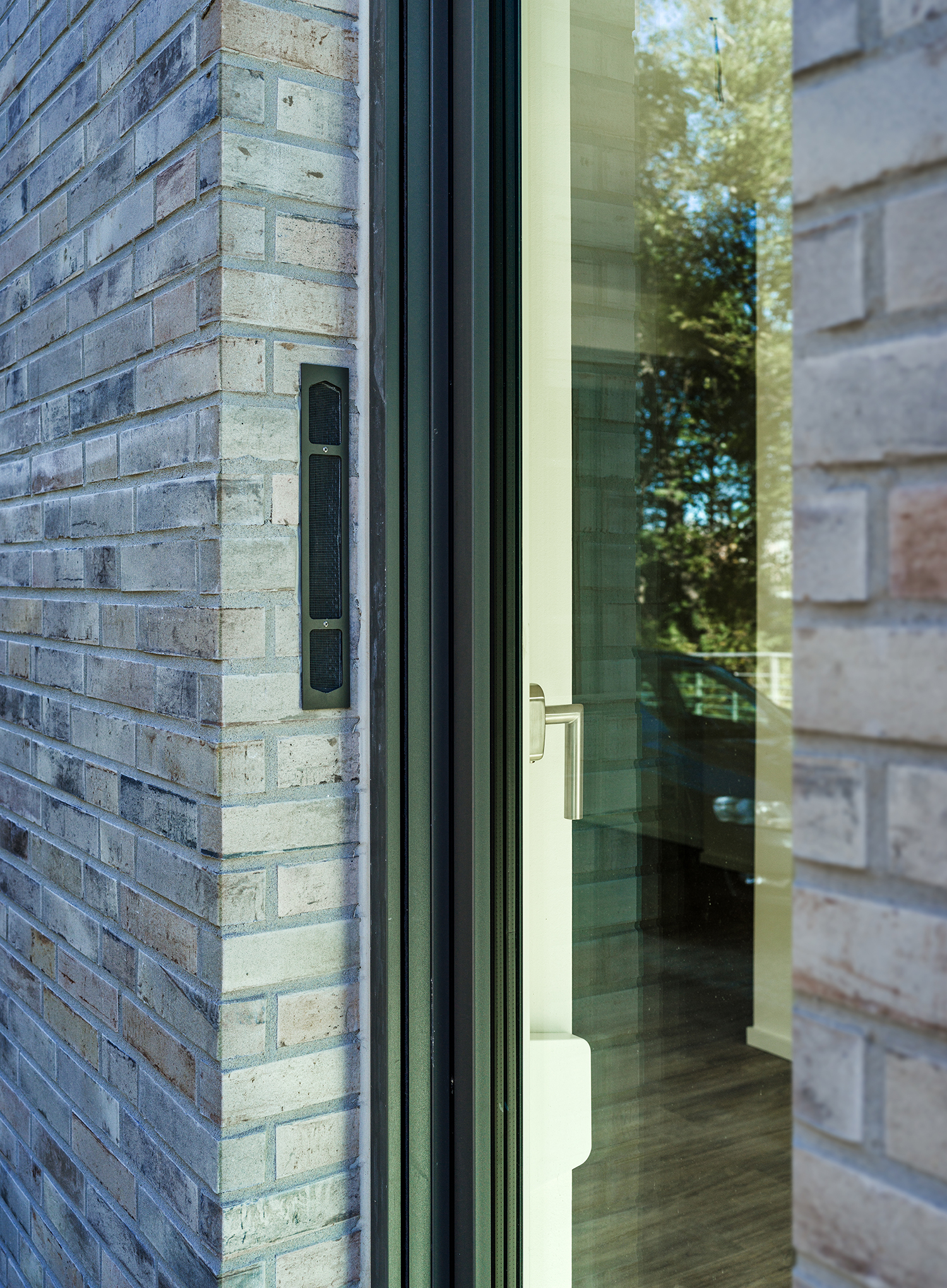 The LUNOtherm-S is an EPP flat duct in the look of a large right angle with a grille on one side and a connection for 160 round ducts on the other. It is only 60 mm thick, so it can be well integrated into the reveal and the ETICS. Its low weight helps to avoid further stressing the fixtures in the wall. The material nevertheless offers the necessary structural strength to keep the element coherent in the insulation and to withstand the changing volume flows.

The low weight and the adaptable standard size also support the positioning of the end element: "The individual components consisting of the right angle, grille and duct connection can be quickly plugged together," reports Schneider. "To achieve the required length or insertion height in the insulation next to the window, it can be cut to size beforehand without any effort." This means that it only takes one or two passes until every worker has internalised the principle. Thus, considerably more finishing elements can be installed in one shift than with heavier and comparable solutions. In addition, work steps such as dowelling, which are necessary with heavier variants in order to fix the component in the wall, are eliminated. The LUNOtherm-S, on the other hand, is simply inserted, glued accordingly and finally encapsulated with insulation material so that the insulation connects without gaps. "There are different procedures, but they can be combined well with this variant," says Schneider.

Practical assembly instructions to help on the building site

The easy handling on site is complemented by practical assembly instructions that provide quick help in case of ambiguities on site. As with all new products from LUNOS, their engineers were present at the first construction projects to provide assistance and to directly record user experiences and incorporate them into the instructions and later further and new developments. "Especially in this construction project in Spandau, we were able to make a direct comparison of different variants between the individual construction sections," explains Schneider. "The difference in the improved handling with the new development of the LUNOtherm-S is clearly noticeable." In addition to the actual installation, however, the handling also includes the construction site logistics, which are crucial in such large-scale projects. "Since the first thing we do as part of the insulation work is set the end elements for the ventilation ducts, we only order the pipe for the ventilation and the LUNOtherm-S at the beginning," Schneider explains. "The Silvento ec and the ALD are delivered at a later stage, as they should not be stored on the construction site to prevent possible damage. As with previous projects, we could always rely on punctual delivery and speedy communication during the first stages of construction in Spandau."